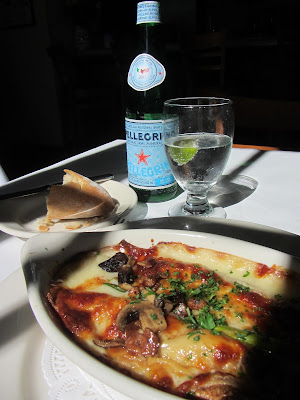 When Kim and I were in Oak Park, Illinois visiting our friend Aberdeen, we found ourselves surrounded by Hemingway.  First, Aberdeen took us to Hemmingway's Bistro for a French-inspired lunch.  Everything on the menu sounded delicious and my Crepes Gratinée filled with ham and Gruyére was as rich and delicious as it looks.  This bistro is the perfect place to sit and catch up with your friends over a long lunch.  Naturally, since we were eating at Hemmingway's Bistro (an extra "m" was added avoid any copyright issues), Ernest Hemingway himself came up in conversation. Kim said that Hemingway "the man-the myth-the legend" turns up everywhere she goes on vacation!

When she was in Spain, she felt that every place she visited, Hemingway had been there first.  In honor of unwittingly visiting his birth place (and the "Ernest Hemingway Foundation of Oak Park"), we climbed the steps of this grand museum...and headed straight for the gift shop. Kim wanted a souvenir. 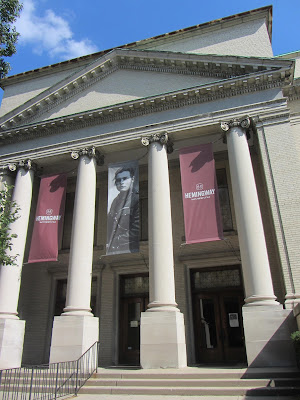 The woman running the shop told us a funny story about a customer asking if they carried "3XL" size t-shirts. When she found one in stock and handed over the giant shirt to her, she commented that she must have a very big man in her life.  "Oh no, she said, it's going to be a nightshirt for me.  I've always wanted to sleep with Hemingway."

So here we were in Oak Park, Illinois, three friends laughing and paling around like we were in high school all over again.  Priceless.
Posted by Anne Reeves at 5:49 PM 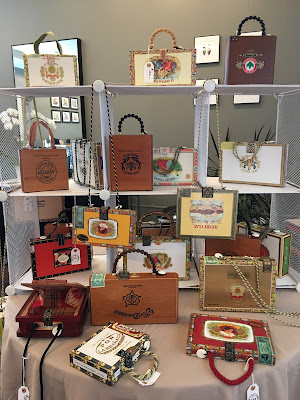